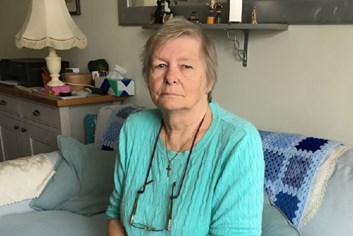 A great-grandmother who was conned out of thousands of pounds in a romance fraud said her family was almost torn apart by the crime.

Sally Jones, 74, from the Beaumont Estate in Littlehampton, gave almost £8,000 to a man she met on an online dating site and lied to her daughters about where the money was going.

Now free from his clutches, she is determined to tell her story to help others. She said: “If it seems too good to be true, it probably is.”

After her partner of 23 years died in February 2014, a lonely Sally joined the dating website match.com looking for company; ‘someone to play cards with or go to the pictures’, she said.

One of the first people to reply to her was a man called Harry, whose picture was of an ‘English man holding a dog’. He wooed her by sending her chocolates, flowers and champagne on her birthday.

Sally said: “I thought it was the best thing since sliced bread. Everyone wants to be loved.”

Despite warning signs like Harry telling her to keep their online relationship a secret and avoiding meeting her in person, Sally fell under his spell. Over two weeks, he got her to send him the money via Western Union, which she did by going to the Post Office, with excuses ranging from asking for money to pay for an operation to replacing a stolen passport and wallet.

Her family realised something was wrong but Sally lied to them – something she deeply regrets: “It could have torn my family apart.

“I look back and think how stupid I was. They put it down to me still grieving.”

Sally finally came to her senses and stopped replying to Harry – who she claimed to be a fraudster living in Africa.

After coming clean with her children, she began the laborious process of changing her bank details, direct debits and phone numbers.

Following a year of counselling to get over the trauma, Sally has now completed a Spanish course and is studying for a psychology A-level at the Adult Education Centre in High Street, Littlehampton.

She also gives talks about her ordeal, most recently at an anti-scam event by Arun & Chichester Citizens Advice in Arundel on Saturday.

Volunteer Ken Porter said: “I feel enormously privileged Sally is willing to share her story with us to help others avoid this heinous crime.”

Tips on avoiding scams were shared at a meeting on Saturday.

Organised by Arun & Chichester Citizens Advice and the Arundel Surgery Community Association patients support group, the event held at the Victoria Institute in Tarrant Street, Arundel, was attended by dozens of residents.

Sam Collier from Natwest Community Banking and Francesca Blow from West Sussex County Council shared some of the challenges with digital banking and the internet, and Tracy Field from West Sussex Trading Standards and PCSO Rich Moorey from Sussex Police shared avoidance techniques to some of the most prevalent scams in Sussex today.

Liz Horkin, chairman of the community association, said: “There have been several incidents affecting local people over the recent years and criminals are coming up with all sorts of ways of challenging us. Being aware will help us avoid the pitfalls.”